In 1990s Cannondale achieved the distinction and goal of becoming the first high-volume producer of aluminum frames, at a time when only steel frames were mass-produced and aluminum was handmade in low volumes. Cannondale marketed subsequent frames with the CAAD designation (for “Cannondale Advanced Aluminum Design”) which first appeared in their mountain bike frame series.

Saeco was the name of an Italian road bicycle racing team, sponsored by the coffee machine company with the same name. They rode on Cannondale bicycles. In the 1990s the team was famous for Mario Cipollini’s sprint train and his antics. One of their most memorable moments was Cipollini’s 4 consecutive stage wins in the 1999 Tour de France. Saeco Team won the Giro 2002 with Gilberto Simoni, Giro 2003 with Damiano Cunego and Worlds Championship with Igor Astarloa.

Damiano Cunego  was born 19 September 1981 in Cerro Veronese, Veneto, Italy. Cunego began cycling as a teenager after being a successful cross-country runner. He was discovered by Giuseppe Martinelli who also worked closely with Marco Pantani. Cunego turned professional in 2002 at the age of 20 with Saeco Macchine per Caffè–Longoni Sport, winning the Giro d’Oro and the Giro Medio Brenta in his first season as professional. 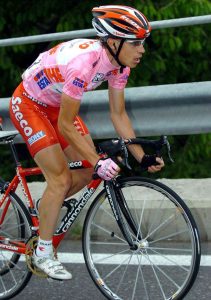 D.Cunego on his Cannondale Six13 at the Giro d’Italia 2004

He came to prominence in May 2004, winning the Giro d’Italia at the age of 22 with Saeco Macchine per Caffè. Cunego’s strength came as a blow to his captain Gilberto Simoni; relations between the two during the race were strained when Cunego sprinted away from Simoni to win the 18th stage after Simoni’s solo breakaway. During 2004 he won the Giro di Lombardia in October, his 13th victory of the season. He finished the season number one in the UCI Road World Cup, the youngest rider to achieve it, aged 23. Cunego’s biggest wins were the 2004 Giro d’Italia, the 2008 Amstel Gold Race, and the Giro di Lombardia in 2004, 2007 and 2008.

Here we are proudly presenting one of the most special bikes that ever came to our store – Cannondale Six13 Saeco ridden by Damiano Cunego, on his way to win the Giro d’Italia 2004. He used exactly this bike on stage 17, wearing pink jersey, the stage won by P.Tonkov. (It’s one of the 3 road bikes used at the Giro 2003). Superlight aluminium frame with carbon fork is build with Campagnolo Record Titanium 10s groupset, outstanding Hollowgram cranks, Mavic Ksyrium SSC wheel, FSA cockpit. One of the lightest bikes in pro peloton back then – impressive weight of 7.1kg

Condition: Used, but very good condition. No cracks, no dents, not bent. Original paint. Some signs of normal use. All parts are working fine.