Ottavio Bottecchia (1 August 1894 – 15 June 1927) is a legend of the cycling world, entered in the history for beeing the first Italian athlete who won the Tour de France on 1924, wearingthe yellow jersey of the Tour from the first to the last stage. He also won the Tour de France in 1925. Ottavio Bottecchia was able to crown a magnificent sporting carrier full of successes and goals which brought prestige to the Italian cycling all over the world. Entered the professionals elite when he was 27 years old, Ottavio became famous thanks to his tenacity and to his great climber’s ability. After working as bricklayer receving a purple heart in the army he decided to follow his great passion and become a professional rider.

In the late 1960s, the Bottecchia brand eturned to bike racing and they achieved many victories. In the course of several decades, cyclists using Bottecchia achieve many prestigious victories: Giro d’Italia (1957, 1966, 1979), Milano-Sanremo (1951), Tirreno-Adriatico (1978); World championship (1966), Tour de France (1989, Greg Le Mond), Giro d’Italia (2006, U23). In the mid-90s the Bottecchia brand is separated from Carnielli, and its corporate team moves Bottecchia from Vittorio Veneto to Cavarzere in the province of Venice. Thus began the rebirth of a brand that points to the world market.”

Team ZG Mobili – Selle Italia – Bottecchia was a top level Italian based professional team back in 1994. They raced 1994 Giro, Tour and Vuelta directed by Gianni Savio. They had a few good riders on board: F.Casartelli, A.Ferrigato, H.Redant and also Carlos Alberto Maya from Venezuela, who’s bike we are presenting here. 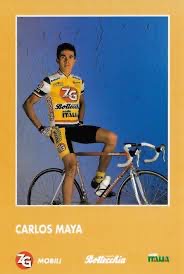 Condition:  Used, but good condition. Original paint and decals. Some signs of normal use.