Philippe Gilbert (born 5 July 1982) is a Belgian professional cyclist, who is best known for winning the World Road Race Championships in 2012, and for being one of two riders, along with Davide Rebellin, to have won the three Ardennes classics – the Amstel Gold Race, La Flèche Wallonne and Liège–Bastogne–Liège – in a single season, which he accomplished in 2011. Gilbert also finished the 2011 season as the overall winner of the UCI World Tour. 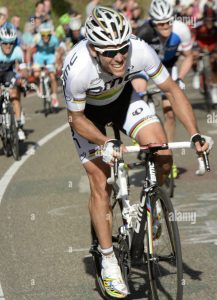 Here we are proudly presenting completely original and authentic world champion’s bike, the BMC SLR01 of Philipe Gilbert (BMC Team) from the first part of 2013 season. The bike is work of art and one of the best bikes in pro peloton from that era. It come with original BMC jersey used by Gilbert. No much words needed.