Bianchi is the world’s oldest bicycle-making company still in existence, founded in 1885 by Eduardo Bianchi in Milan, Italy. No doubt, Bianchi is the pioneer of bicycle development since the beginning. In 1885 they pioneered the use of equal-sized wheels with pneumatic rubber tires. Edoardo Bianchi designed first lady bike in 1895 and it was made for Queen Margaret. The Bianchi reputation began when the company sponsored Giovanni Tommasello, the winner of the Grand Prix de Paris in 1899, which evolves into Tour de France. Bianchi presented the first bicycle ever featuring a cardan joint transmission in 1901. They invented the front brake system in 1913. In 1914 Bianchi was a famous and reputed manufacturer: in just one year, production settled on extraordinary figures: 45.000 bicycles, 1.500 motorbikes and 1000 cars. In 1915, Bianchi produced a bike for the Army, equipped with wide-section tyres, folding frame and suspensions on both wheels.

Angelo Fausto Coppi (15 September 1919 – 2 January 1960) was an Italian cyclist, the dominant international cyclist of the years each side of the Second World War. His successes earned him the title Il Campionissimo – “Champion of Champions”. He was an all-round racing cyclist: he excelled in both climbing and time trialing, and was also a great sprinter. He won the Giro d’Italia five times (1940, 1947, 1949, 1952, 1953), the Tour de France twice (1949 and 1952), and the World Championship in 1953. Other notable results include winning the Giro di Lombardia five times, the Milan–San Remo three times, as well as wins at Paris–Roubaix and La Flèche Wallonne and setting the hour record(45.798 km) in 1942. In years 1945-1955, Fausto Coppi was riding for BIANCHI Team, one of the strongest teams back then. 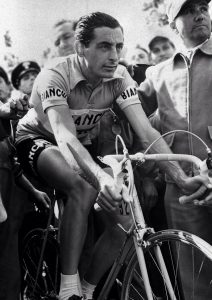 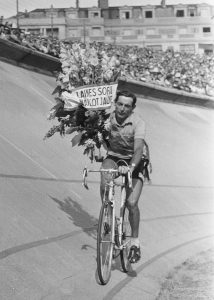 Here we are proudly presenting one of the most appreciated racing vintage bikes, the Bianchi Tour de France. This jewel dates back to 192 (thanks to special Bianchi vintage bike register), one of very earlies Tour de France models, almost identical to the bike that Fausto Coppi rode back in 1952 and 1953. This very rare steel racing machines produced only for 1 year (from late 1952 to late 1953). Extraordinary details of the steel frame makes you understand that Edoardo Bianchi was a medical tool engineer, before he started with bike manufacturing. Equiped with original Campagnolo Gran Sport gearing system, original Bianchi cranks, Bianchi cockpit, original Bianchi pedals,  NiSi rims, original Aquila leather saddle, Universal 453949 brakes, so just top of the top components from early 1950s.

With this milestone you can get an incredible experience how cycling heroes rode back in the golden era of cycling history or just to get a lot of attention at all historic cycling events.

Very special catch for any collector. Bicycle stayed in a private museum for the last 50 years.  L’Eroica ready.

Condition: Used, but good condition. Original paint and decals. No cracks, no dents,  not bent. All parts are working fine.