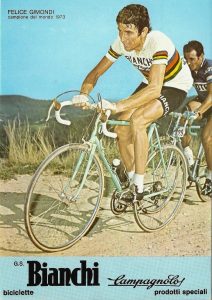 Happy to offer another Bianchi‘s top class racing machine, the Specialissima Professionale which dates back to 1974. Extraordinary details makes you understand that Edoardo Bianchi was a medical tool engineer, before he started with bike manufacturing: beautiful lugs, lightweight Columbus SL tubing and aero-shaped seat stays marked Bianchi with serial number on both sides of the seat lug (serial number 1.74 means the frame was made in January 1974). Same as Felice Gimondi‘s bike, also this Specialissima Professionale is fully build with Campagnolo Nuovo Record groupset (PAT.74), 3ttt saddle, handlebar, stem and NiSi rims. Comes with vintage Binachi water bottle and bottle cage. No much words needed.

Condition: Used, but very good condition. Completely restored and refubrished. No cracks, no dents, not bent. Some signs of normal use. All parts are working fine.

* Shipping worldwide available. Due to copyright reasons the photos are in lower resolution and marked with watermark. If you are interested in buying, have any questions or would like to request a full HD photo album of the bike please feel free to contact us.