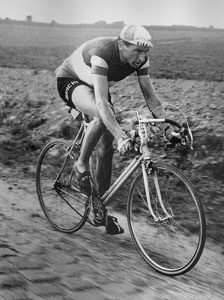 Here we are proudly presenting one of the most appreciated racing vintage bikes, the Bianchi Paris Roubaix. This jewel dates back to 1951 (thanks to special Bianchi vintage bike register) and is almost identical to the bike that Fausto Coppi rode back in 1950 and 1951. Extraordinary details of the steel frame makes you understand that Edoardo Bianchi was a medical tool engineer, before he started with bike manufacturing. Equiped with original Campagnolo Paris Roubaix gearing system, original Bianchi cranks, Ambrosio Champion cockpit, NiSi rims, original Bianchi leather saddle, Universal 453949 brakes, so just top of the top components from early 1950s.

Condition: The frame has been completely restored and refubrished by professional guy. The frame has no cracks, no dents and is not bend. All parts are working fine.