Back in early 1940s, Tulio Campagnolo stood on a cold mountain top, and couldn’t unscrew the wing nuts on the rear wheel of his bike because his fingers were frozen. He enhanced his products while constantly seeking cutting-edge solutions. He invented the quick release hub and revolutionary gearing system called Campagnolo Cambio Corsa called also Campagnolo ”due leve” (two lewers) gearing system. To change gear the rider would: 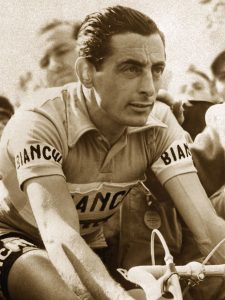 With this very rare milestone of the cycling history, we reached the top of what we can offer  to bike collectors worldwide – Bianchi Folgore which dates back to 1941, thanks to special Bianchi vintage bike register. Equipped  with original Campagnolo Corsa ”due leve” gearing system, original Bianchi cranks, Bianchi marked hubs, NiSi rims, Universal 361666 brakes, Bianchi marked stem and pedals…

With this cycling milestone you can get an incredible experience how cycling heroes rode back in the golden era of cycling history or just to get a lot of attention at any historic cycling events. Similar bike was ridden by Fausto Coppi back in mid 1940s.

Condition: Used, but good condition. New paint. No cracks, no dents, not bent. All parts are working fine.