Franco Pellizotti (born 15 January 1978) in Udine, Friuli-Venezia-Giulia. An Italian former professional road bicycle racer, who rode professionally between 2001 and 2018 for the Alessio, Liquigas–Doimo, Androni Giocattoli–Sidermec and Bahrain–Merida. Pellizotti now works as a directeur sportif for the Team Bahrain Victorious team. Pellizotti was known as a climbing specialist and won Stage 10 in the 2006 Giro d’Italia, Stage 16 in the2008 Giro d’Italia and Stage 17 in the 2009 Giro d’Italia. After finishing third overall in the 2009 Giro, he won the polka dot jersey in Paris as the best climber of the 2009 Tour de France, as well as named the Most Combative (Aggressive) Rider on Stages 9 and 17. 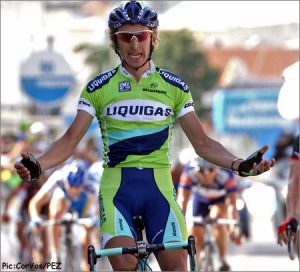 Bianchi’s Reparto Corse (Bianchi’s Race Department) facility hand built frames for their top riders. Back in 2006 they released Bianchi FG Lite the guys from Team Liquigas were winning races around the globe on their bikes. FG Lite is incredibly light and originally suitable for climbers and even sprinters. The exclusive 7000 series Hyperalloy aluminium, alloyed with Zinc and Magnesium, used in this frame, is a point of reference for all material designers yet is unbeatable on the market (having a tensile strength of 650N/mm2). Built with Campagnolo Record Titanium 10s grouped, stunning Campagnolo Bora Ultra wheels.

Condition: Used, but excellent condition. No cracks, no dents, not bent. Original paint. Some signs of normal use. Groupset is in very good condition.