Bartali earned respect for his work in helping Jews who were being persecuted by the Nazis during the time of the Italian Social Republic. It emerged in December 2010 that Bartali had hidden a Jewish family in his cellar and, according to one of the survivors, saved their lives in doing so. Bartali used his fame to carry messages and documents to the Italian Resistance. Bartali cycled from Florence through Tuscany, Umbria, and Marche, many times traveling as far afield as Assisi, all the while wearing the racing jersey emblazoned with his name. Neither the Fascist police nor the German troops risked discontent by arresting him.

Bartali’s rivalry with Fausto Coppi divided Italy. Bartali, a conservative, was venerated in the rural, agrarian from the south. While Coppi was more worldly, secular, innovative in diet and training, was a hero of the industrial north.

There are many stories about Bartali that will never be forgotten. In 1943, he led Jewish refugees towards the Swiss Alps himself. He cycled, pulling a wagon with a secret compartment, telling patrols it was just part of his training. Bartali told his son Andrea only that “One does these things and then that’s that”. Even after the war he never boasted his merits, he used to say: “The good is done, but it is not said. And certain medals hang on the soul, not on the jacket.”

Bartali bikes were produced by Santamaria brothers from Novi Ligure, in years 1949-1955. 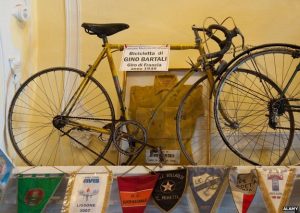 Condition: Used, but very good condition. Completely restored, re-chromed and repainted. No cracks, no dents, not bent. All parts are working fine.