Bartali earned respect for his work in helping Jews who were being persecuted by the Nazis during the time of the Italian Social Republic. It emerged in December 2010 that Bartali had hidden a Jewish family in his cellar and, according to one of the survivors, saved their lives in doing so. Bartali used his fame to carry messages and documents to the Italian Resistance. Bartali cycled from Florence through Tuscany, Umbria, and Marche, many times traveling as far afield as Assisi, all the while wearing the racing jersey emblazoned with his name. Neither the Fascist police nor the German troops risked discontent by arresting him. People all over the world praise him as a hero.

Gino Bartali finished his racing career in 1954. In early 1960s he became a sports director of Team San Pellegrino and the entire team rode Bartali branded bikes made by Galmozzi factory. 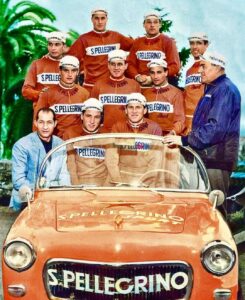 Condition: Used, but good condition. Original setup. No cracks, no dents, not bent. All parts are workig fine.